Feudalism is the system that governs the world in the Throne and elsewhere.  This term is used for all systems that interact with the state of the game world, and allow Characters to create Game Effects that make use of the greater world outside of the space occupied during Events.

Tier 2 Only Game Theaters that are Tier 2 or higher make use of these rules.

When we discuss the game world, there is a hierarchy of scope.  Within the world, there is one Theater for each distinct game running Gothic: the Lion Age Events.  The Theater represents both the scope of the direct happenings of that story, as well as the geographical area where those events take place.

Within a Theater are many Provinces.  A Province is a distinct region within a Theater, and is of a certain biome, such as Forest, Mountains, Plains, or Swamp.  The terrain of a Province determines what natural resources are present, as well as some circumstances relevant to Warfare.  Provinces appear on a map, with some Provinces adjacent to others, allowing travel between them.

Each Province holds several Areas, which are more specific places within a Province.  Most Areas will share a type with their Province, such as Forest or Mountain, but some may take on the types of neighboring Provinces or have other features.  Some Areas are Strategic, while others may have Cultural value, such as a religious site.

Characters can construct a Settlement in an area in order to start building there.  Most Theaters have a specific Settlement that the game events center around, and are the in-game location of the Events.  Much of the new construction is bound to happen there, but as a community grows, new locations will need to be settled in order to get and defend their resources.

Each Settlement starts with a Key Building, a special building that provides the purpose of the first establishment there.  This is often a mine, farmland, or other site for extracting resources from the land, but may also be more strategic or cultural, such as a fort, shrine or harbor.  The development of this Key Building sets the tone for the Settlement, and will influence how it develops.  Gathering sites can be used to gain Supply, large quantities of harvested natural resources fit to do major industrial and construction projects.  These Supply can be used to build further buildings and continue to develop the Settlement.

Housing and other incidentals will automatically be built by the population of a Settlement, but characters may additionally wish to build Landmarks.  Landmarks are buildings or groups of buildings that serve a useful purpose within the city.  The most typical reason to build Landmarks is to be able to make use of their Downtime Action.  Every character may take just one Downtime Action for each Chapter that passes.   Lastly, some Landmarks can have further customizations and improvements made inside them, called Rooms.  Rooms are special purpose sites that add or change functionality of their parent building.  Constructing rooms requires furniture items that can be made with the Carpentry Skill.

Typically, a Theater has multiple Settlements within.  Some of these are to capture resources, while others may serve strategic purposes.  Each Character lives in only one Settlement, and may only take Downtimes within the Settlement they live in.  Picking up and moving to a new Settlement takes 1 Chapter, although a Settlement with an Inn can take visitors more easily.  Workers needing to live where they work means that distant Settlements, each requiring workers, must have its own amenities for those that live there.

Settlements that work together can form a Reich, and be effectively different areas within the same Settlement.  If a Settlement is paying taxes to another, they contribute in the form of any Landmarks that they construct adding their Virtues (and Vices) toward the greater whole, though with some loss based on distance.*

If a Settlement has its own agreed upon leader, it can secede from a Reich, and any of its qualities (and problems) will be considered separately, effectively its own Reich.

The city is the home to all manner of people, animals, structures and ideas. It is the heart of communities throughout the Throne, whether they are but small hamlets with only a few families, or massive sprawls with ancient towers next to modern mechanical bridges.  The unique character of the city is participatory – everyone has an opportunity to invest in the shared collective of human civilization, sharing the same public goods and ills, while becoming wealthy by fulfilling the needs of their neighbors.

Cities are different in their makeup, culture and development.  Every Settlement has traits called Virtues that describe what sorts of things happen there, and what sorts of improvements can be feasibly constructed.  Likewise there are also Vices which describe the problems that the the growing city produces for itself.  Landmarks correspond to one Virtue and one Vice, and contribute to that quality of the city.  Over time, as certain thresholds are reached, the rank associated with each increases.  At each Virtue level, new Landmarks can be created, and new Opportunities arise.  Likewise, as Vice increases to certain levels, it creates the potential for new kinds of and degrees of Crisis.   These current affairs, collectively called Dilemmas, arise naturally over time, and influence the course of game Events.

Virtues serve as milestones in the functional aspects of a city, while Vices are the dysfunctional side effects.  Each building of that type contributes toward the next milestone, which will allow the next tier of buildings aligned with that Virtue to be built.   Settlements begin with each trait at the basic level.  They reach the Advanced tier at 10 tags, and the Master tier at 25 tags of a given trait.

The more of a given trait is present in the makeup of a Reich, the more frequently those sorts of Dilemmas will present themselves.  Every tag of a given type accelerates the clock a little more. 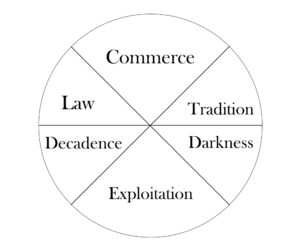 When a Dilemma occurs during an Event, it is brought forth before the public to make a decision about.  If there is a ruler or court being held, it will be presented there, but in some Settlements it may be at more informal town gatherings.  Opportunities usually have some kind of cost or tradeoff required to take advantage of them, while Crises usually have some kind of danger or cost associated with allowing them to go unanswered.

Dilemmas almost always have some kind of option about whether they are addressed, and in what manner.  The option will nearly always exist to handle the matter personally, on a character level, such as going to the scene of a crime, rousting out gathering creatures, helping the downtrodden, or other kinds of engagement.  However, some Landmarks provide the ability to address Dilemmas in special or useful ways.  For instance, if crimes are being committed, sending guards provided by Law establishments can be quite useful in addressing the issue.

As Settlements develop, they increase in Population.  While most Settlements in the world increase in Population slowly through generations, some Settlements are the subject of dynamic events that might stir excitement enough to move there, or return there after a previous disaster.  Every unit of Population represents approximately 100 people of various ages and talents, but of a specific Social Class (Peasant, Merchant, Gentry, or Scum) and of a specific Culture.  It is typical of that the Culture of immigrants be of whichever country the Settlement resides in, but border Settlements and those in special circumstances may see more immigration from elsewhere.  Some cities even make special efforts to attract specific people, making their arrival more likely.

Increases in Population happen as Opportunities introduced by increases in certain Virtues or Vices.  Strong Commerce attracts Merchants, Law attracts Gentry, and Tradition attracts Peasants.  Scum are non-productive members of society, and are usually the result of mismanagement or Crisis.  Population of the other Social Classes that suffer serious losses become Scum, and in some cases, they may immigrate from elsewhere as refugees or unusually as whole gangs of criminals or deserters.  It is possible, though difficult, to convert Scum into other Social Classes.

While Landmarks are the most notable buildings and places in a Settlement, ones that any resident would know, they aren’t the only ones.  Housing for the population, other less important shops and businesses, and other incidentals also exist in a Settlement, but have no particular Game Effect.

Most, but not all, Landmarks require part of the local Population to work there for them to be functional.  If available, the appropriate kind of Population to work in the area will do so automatically, and whatever benefits the Landmark provides will take effect.  Landmarks usually provide some Game Effect, such as the ability to perform a specific Downtime Action, and also contribute Virtues and Vices to the Settlement.  Some landmarks, such as public monuments, do not require any Population to take effect.

Some Landmarks are Public, representing large public resources such as a mining complex, a harbor, local monuments, fortifications, and so on.  These Landmarks, if they are staffed appropriately, can be made use of by anyone.  Other Landmarks are Private – these are usually owned by Organizations and require a specific group to allow access to those who wish to use it.  They may have some public effect on the city, but usually they provide that Organization with special abilities that can be used at their discretion.

Tier 3 Only Game Theaters that are Tier 3 or higher make use of Organizations and Private Landmarks.

If the Virtue requirements are met, a Landmark can begin construction.  Each Landmark has a cost in Supply, the large quantities and sizes of goods that are useful in major construction.  These are distinct from the small-scale goods gathered during Events by Gathering Skills.  Instead, Gatherers use large scale Landmarks such as Mines, Farmland, Game Reserves, Lumbermills, and other such locations in order to generate Supply scale goods using their Downtime Action.  When Supply is generated from these sites, it sits in an inventory in that Settlement.  Supply that are in the stockpile of the Settlement where the Landmark is to be constructed may be used by anyone, while Supply in private warehouses will need the permission of the owner.

Besides Supply items, most construction also requires Labor.  Once the physical Supply have been secured to create a Landmark, a Construction Site is created.  The Downtime associated with a Construction Site is Labor, which creates a special kind of Supply necessary to move the project forward through direct effort.  Labor can only be applied directly to a Construction Site, not saved, pooled, or reserved.  Some Landmarks and other large-scale tools may increase the effectiveness of Labor.

Some basic construction only requires Labor to create.  These are things like simple mining or logging camps that can begin extracting resources, or paths that act as critical infrastructure between Areas.  While caravans might eventually be created to make the moving of Supply units easier, young Settlements can only move Supply from one Area to another by spending Labor.  This painstakingly moves 1 unit of Supply from Area to another that is connected by a road, and it takes 1 additional Labor per Province moved.  Wagons and horses can increase the effectiveness of this kind of transit.

Finally, some Landmarks, especially Farmland, create Food.  Food is vital to a Settlement, as it keeps the Population healthy and happy.  Unused Food perishes and is lost, unless some other Landmark is involved in storing it.  If there is a Food shortage, Population that is left unfed become Scum, doing whatever they must to survive.