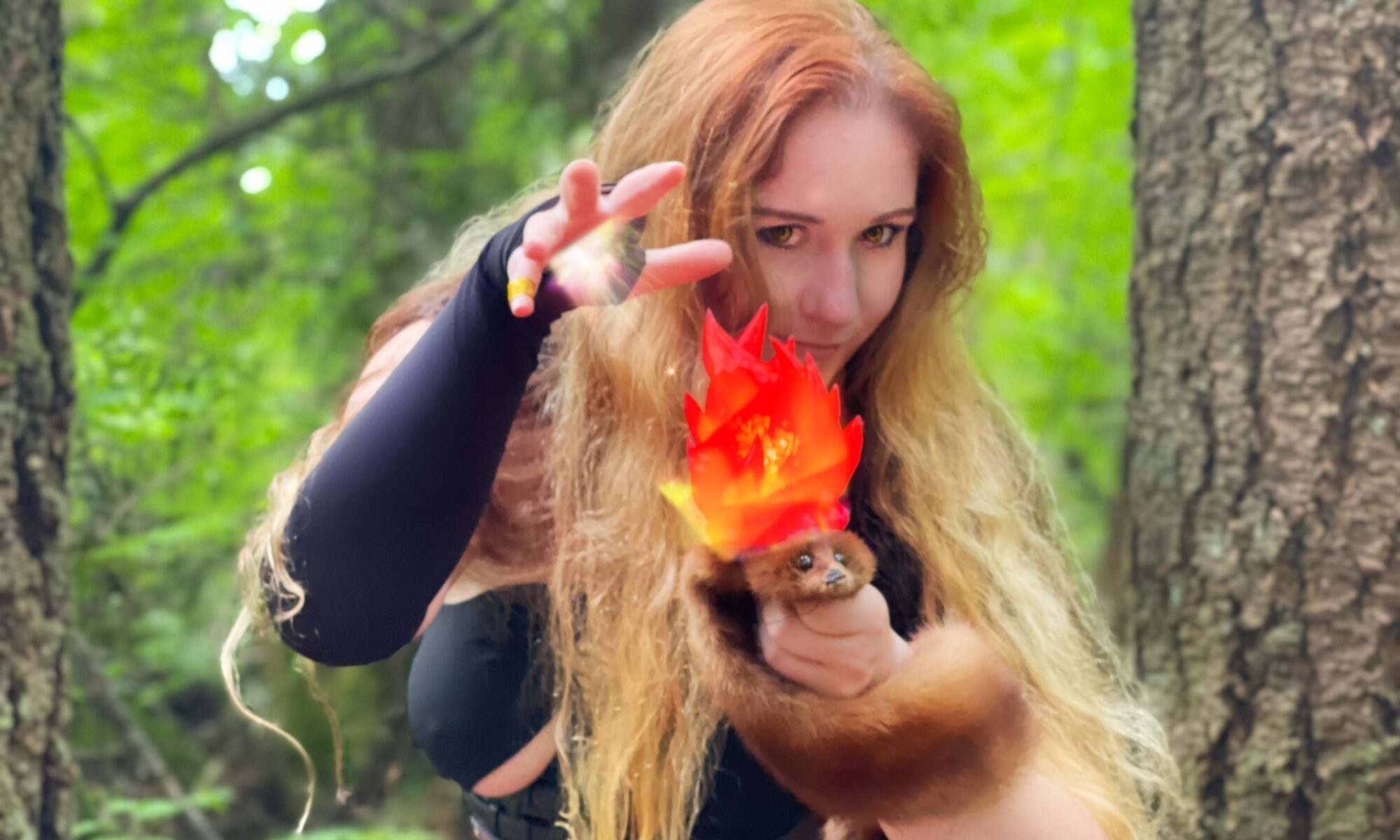 The tale of Comfort Weasel

Solfyre stroked the skinned weasel at her hip, or “comfort weasel”, as it was called, as she looked down over the city. Comfort weasel was his own story and had been a long time companion on her adventures.

When Solfyre was a young girl, around her eighth year, she had been walking home from butcher Valgrun’s farm with her best friend, Brunhilde. Brunhilde had noticed Solfyre was in a poor mood. When Brunhilde confronted Solfyre about her oddly distant behavior, Solfyre confessed to Brunhilde that she had felt deeply upset by something that had happened in the early hours of the morning. She went on to explain to Brunhilde that her mother and father had sat her down after a brief (and awkwardly silent) meal then told Solfyre that she was old enough to know that they, Quirin and Sylvi, the man and woman that had raised her, were not her birth parents. In that moment they confirmed the snippets of rumor that she had heard whispered amongst the White Eyes clan children for years—that she was adopted.

That morning they explained to Solfyre that she had been adopted by them after being found in the woods along the border of White Eyes territory by her father, Quirin. Despite Solfyre not being biologically their own, her parents had expressed their devoted and loving adoration for their daughter. She could tell that they were terrified she might reject them based on their expressions and abnormally meek demeanors. That said, they had nothing to fear. She could never do such a thing to the wonderful people who raised her.
They also told her that the mark on her chest was not a birth mark, a tale that they had been telling her most of her life when she brought it up, but a branding that someone had cruelly burned into her flesh as an infant. For what reason, no one knew. They apologized for not telling her sooner and told her that if anyone was going to tell her, they wanted to be the first ones rather than another clan member.

Solfyre embraced them and thanked them for the truth, making sure to also scold them for their slothful ways, of course. She was, after all, a good Benalian.

Solfyre had been honest about her feelings towards her parents, but she had left out that she wanted to know more about her birth parents. Her father, Quirin, hadn’t been able to tell her much other than where she had been found and that the only trace of another’s presence had been poorly masked footprints from a woman leading away from the bundle of skins Solfyre had been swaddled in. No name was etched into the skins, no beads or charms ingrained with runes. Quirin and Sylvi had named her themselves, calling her “Solfyre” or “suns fire”, a reference towards the sun rune and pattern burned on her skin.

Solfyre had been sitting on her emotions ever since. Why was she abandoned? Why was she branded like that? Did her birth parents leave her as a sacrifice? Did they want her to be found? Had she been stolen away from her birth parents? Who burned the rune into her chest? Did she have other family? All these questions tore at her.

After Solfyre had finished with the story, Brunhilde piped up, “sounds like you have a case of the brain weasels.”

“Haven’t you ever heard that? I don’t know what it means, but whenever I’m upset my mother tells me it’s just brain weasels. Dunno, that’s just what they say,” Brunhilde had shrugged.

“I’m not really sure. I think they just kinda leave on their own, you know?”

“Can you get rid of them faster?”

“I’ve never seen one, but normal weasels are pretty fast and stealthy. Can’t imagine the brain variety are easy to kill. They’re probably smarter. Good luck getting rid of them. I suggest leaving out cheese crumbs and leaving a trail of ‘em over to a neighbor’s house and stashing a pile of cheese under their deck. That’s what Mama does with rats when we get ‘em,” Brunhilde had told her before heading towards her own house and waving goodbye.

Later that evening, after supper, Solfyre was gathering some of the late summer berries by the forest’s edge for her mother’s famous honey-berry mead when out of the corner of her eye she saw a flash of reddish fur amongst the brambles.

A weasel, the longest she had ever seen, was looking up at her with a strange expression. It’s eyes were round, glossy, and unblinking. Based on other evidence, she could see that the critter had managed to make its den in a cluster of a plant her mom called “old man’s folly”. The rare plant, often harvested in late spring, would frequently be harvested for its seed pods which would burst by the beginning of summer into a white powder. The analgesic hallucinogenic compound was often used when treating those injured in gruesome accidents needing relief when no physicker was readily available—though recreational use was certainly not unheard of.

The weasel, it’s nose and paws coated in white powder, stared at her with and cautiously moved towards her as if stalking it’s prey. What kind of weasel hunts people? Oh.
Seeing her chance, Solfyre lunged, grabbing the weasel around its neck. They rolled through the brambles for a couple seconds, the weasel trying to bite at her face before she reached into its white den, grabbed a fistful of the powder, and shoved it inside the weasels mouth. She then proceeded to clamp the raging critter’s mouth closed and held it tight with both hands. The weasel’s wide eyes never shut, but after a short bit, it did grow limp. At least he died doing what he loved, she had thought.

As she had walked inside the door to her house, no berries, cuts everywhere, white powder streaked across her skin along with blood and a strange weasel hanging out of both ends of the basket she had been sent with, her father and mother paused to look at her. They were worried perhaps she had been too torn up about the news they’d sprung on her just that morning and she was going through a crisis. They each waited quietly, unsure of what to do or say as they didn’t want to make things worse.

But then she had spoken, “Mom, Dad, I did it. I got the brain weasel. It’s dead. No longer will I feel despair now that this wretched drug ferret has been slain… you are my parents. That’s really all that matters. I love you both. Also, I am going to take a bath. Save me some dinner. Oh, and I’d like hunting lessons.”

And with that she had walked out of the room, leaving the weasel in the basket on the table. Her father had been so proud of her first kill and triumphant endeavor that he had the clan furrier turn the thing into a trophy, of sorts, for his daughter. The glassier had even made bead eyes to replicate those from its life and helped stick them on the masterpiece.

When she told Brunhilde of the epic tale the following week and showed her the long taxidermy that hung from her belt, she had said, “well, that’s the craziest lookin weasel I ever saw. Has to be a brain weasel. I can’t believe you did it! Gotta be comforting to not have the brain weasels comin after you any more. Now it’s a comfort weasel. A sign to other brain weasels not to mess with ya.” 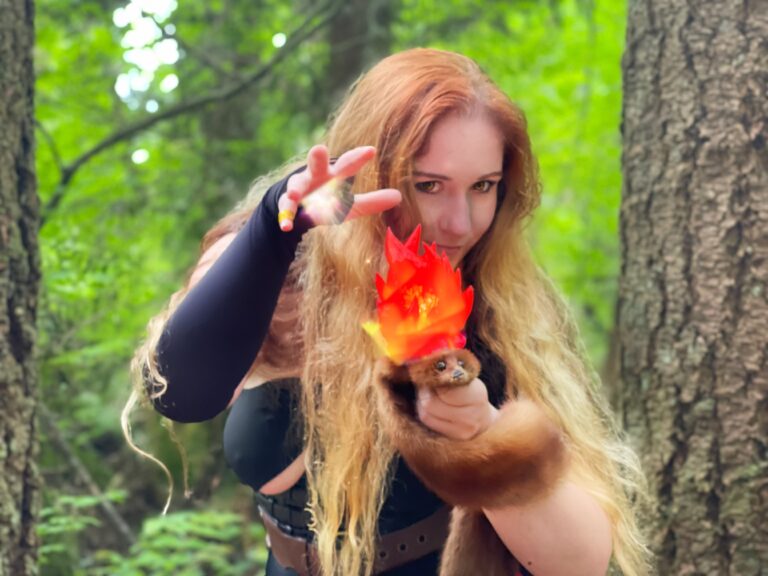