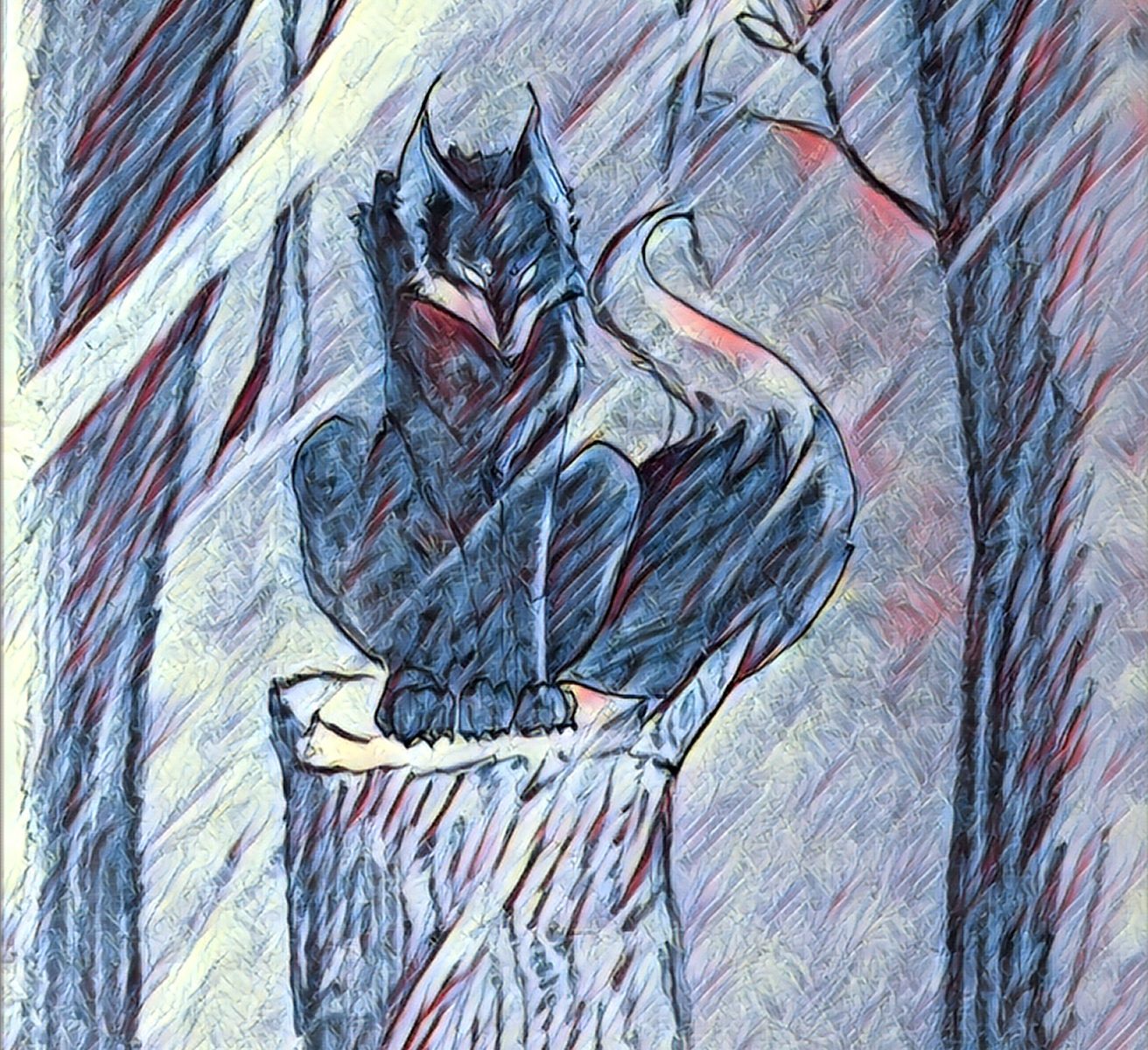 The fox and the hunt

The sound of the footfall of horses and hounds rang through the forest, disrupting the song of nature and making the birds fall silent. Alexandria let out a deep sigh and set her mushroom shaped mace and shield behind a tree, calling out “vindicur” which allowed the items to get rooted and stand up on their own. She placed a hand out, as if to say “wait” to the black fox behind her. Reluctantly following the command, the fox let out a grumpy growl and crawled beneath the mushroom.

“Manach, manach, Manach,” alexandria said to herself, flipped her cloak inside out, and began to walk towards the sound. She could tell the animals were fast approaching, for the animals riding on the back of the horses were loud and obnoxious in their chase. A rabbit raced from the brush and past alexandria who called to it and told it where to hide. Short on its tail, several hounds broke through the clearing. Alexandria spoke and the dogs came to a quick hault.

“What are you doing you lazy mutts!–oh? What do we have here?” a large man on horseback came through the trees followed by two scrawnier men in furs and leathers wielding guns. “What is a little lady like yourself doing out here?”

“Oh, I was walkin’ through the forest, gatherin’ ‘erbs when I came upon this clearin’ and stopped to catch me breath. Ye can imagine the surprise I got when yer dogs came a runnin’ through the bushes, gave me quite a fright!” Alexandria said with sincerity and acted as though she had been scared by the dogs who now laid down and watched her as if waiting for another command. I really need to work on my Dunnick accent, she thought to herself.

“Well, lil’ lady, what do you call yourself?” the head huntsman asked, a grin on his cocky face.

“Saoirse,” she said sincerely once more and bowed some with her black cloak dipping with her movement and sweeping the ground, “What ‘er you fine gentlemen doin’ out in these lands? If it were huntin’, I would warn ye against it. There is a guardian up’in these woods who protects it. I hear there is good huntin’ ov’r yonder that be just the same if not bett’r. ‘Sides, this land is owned by a Lady in Stragosa who don’t like any poachin’ on ‘er land,” she makes a point of pointing to the north east, away from her parcels when she mentions the other hunting spot.

The huntsman stops for a moment, his brow raised as he looked upon the woman before him. Alexandria stood before him, her cloak turned black, her hair grown out to a dark red that was tucked partially inside the cloak, her eyes rust brown, and her pale skin painted with freckles. She certainly looked the like a Dunnick woman and they definitely seemed to believe her. Alexandria was happy they didn’t examine her up close or they’d see the freckles were more like spots and the hair like that of a horses mane. Though even then they likely would not notice the likeness to an animal she displayed.

“Well, young lady, we’d best be getting back to the hunt. I haven’t heard of any guardians and this land seems full of game. Can’t miss out on the opportunity and so long as you don’t go snitching,” the man leaned over his horse in a threatening manner, “ain’t nobody gonna know. Don’t do anything you’ll regret, just go on as if you never even saw us.”

Alexandria held back a growl. She was more disciplined than to fall to his intimidation tactics, but he didn’t know that. She turned her eyes to the ground and nodded once as if to say she agreed, then allowed the men to go on their way. Once they and the dogs had left the clearing, she shook the magic away and growled. Her hands we balled up in fists at her sides.

“I tried to warn them, these are MY lands and MY animals. But no, fine, want to be like that? Fine. Want to play intimidation games? I’ll show you intimidation games. I hate when men try and intimidate women like that and I hate when they don’t take women seriously. You think you’re scary, guy? Okay, let’s do this,” Alexandria walked with purpose back to her mushroom and fox. “Aura, lets go.”

The little gold eyed fox looked up at her with what appeared to be a grin, knowing exactly what Alexandria was planning. Alexandria uprooted her mushroom and carried it off, getting ready for an experiment that would soon be under way.

——–
The three men and their dogs ran throughout the woods for what seemed to be hours. The birds’ songs had died down and the animals all seemed to be in hiding. They cursed and swore, but still they could find anything to bring down and show for their day’s trek.

“Not one fucking deer or fox or even rabbit! I’m starting to think that guardian chased them off,” the scraggly brown black haired man on the last horse whined.

“Don’t buy into that shit. It’s probably just some rumor the noble who owns the parcel spread to keep people off of it, thinking the peasants would be too stupid to challenge their words,” the master huntsman grumbled. “If there were a guardian, we’d take it and gather it’s fur. Bear or monster alike, I dare it to come out and taste the bullets I have waiting for it. We’d hit it and let it run till it died then grab its hide all the same!” The man held up his gun and called to the woods as if taunting them.

Just as the man finished his sentence, a fox burst from the ground before the hounds who began to wail and bark. “Finally!” the men cried and they began their chase. Several shots rang out, but never did the shots seem to hit their mark. They chased the black furred fox through the trees and down to a river bank long enough that the dogs and horses seemed to grow tired. Once to the water’s edge, the fox still did not yield and it swam to the other side.

Once upon the other bank, the fox turned to them men and let out a startling, near human laugh which made the dogs shudder and retreat behind the horses. Though the men urged the dogs and horses forward, they would not listen to their commands. The men cursed and were about to shoot from where they sat when their eyes were drawn to the fox’s strange behavior. At first it seemed to taunt them, but then it dove clear out of sight and behind a rather large tree only to have a much larger figure appear from the other side. As it crept forward, the men all ceased their swearing and became fixated on the creature before them.

It stood the size of a man on four legs with black fur the color of a moonless night and looked upon the men with eyes that burned gold like the sun. Its legs were long and elegant and tipped in long black claws and it hoped upon a stump with speed and grace then sat before them in the dimming evening light. Even the remaining sunlight that sifted through the trees seemed to be swallowed up by the darkness of its fur. “You called, here I am, huntsmen. You have such disdain for the land, no respect, only in it for the next kill,” the horrifying creature spoke, “You have hunted me, you have hunted and tried to take from the land that I protect. Tell me then, why should I not come for you in turn? Were you not warned?”

The men stared in disbelief for several moments and the horses’ breaths became panicked though they did not dare move. The hounds had all gone into hiding.

The main huntsman seemed to begin to speak and lifted his gun just slightly, though at that moment the creature hopped from the stump and leaped to the bank across from them, readying itself to leap forward. “I, too, enjoy the hunt!” The creature roared. The horses with the men clinging to their saddles and the crying hounds began their frantic run from the woods. For a while the creature chased them, though by the time they were closing in to stragosa, they seemed to only be chased by a small black fox who ran hard on their heels all the way back. Many of the peasants who watched the men run into the city seemed perplexed and even laughed as they saw all the animals and hunters running so frightened with only a cute little fox in toe. The fox even stopped to pleasantly greet some of the people watching once the men had fled out of sight and into the city before returning to its woodland home.

The next day the men found themselves seats at the bar, their eyes sunken, tired, and still filled with terror. They tried to drink away the memory of the traumatic experience, when they found themselves listening to a curious song. They turned their attention to the stage only to see the same Dunnick woman from before, singing:

“And up there sprung like lightning a fox from out of his hole
His fur was the colour of a starless night, and his eyes like burning coals

‘Ride on, my gallant huntsmen! When must I come again?
For you should never want for a fox to chase all over the glen
And when your need is greatest, just call upon my name
And I will come, and you shall have the best of sport and game!’

And the men looked up in wonder and the hounds run back to hide
For the fox, it changed to the Devil himself where he stood on the other side
And the men, the hounds, the horses went flying back to town
And hard on their heels come a little black fox, laughing as he ran…”

The woman smiled as she looked over the audience until her eyes fell upon the huntsmen. As they did, for a moment, her eyes reminded them of the beasts and seemed to burn holes in their souls. While the others in the room seemed captivated by the woman’s voice and hopeful, the men were traumatized and quickly ran from the bar, hopped on their horses, and fled the city.

After the song had finally ended, the woman dismissed herself from the stage and the band who had played so beautifully beside her. She went up to the bar with a smile, and paid off the rest of their tab. Then returned home at last, confident that they had been taught a lesson, and ready to be her normal self once more. 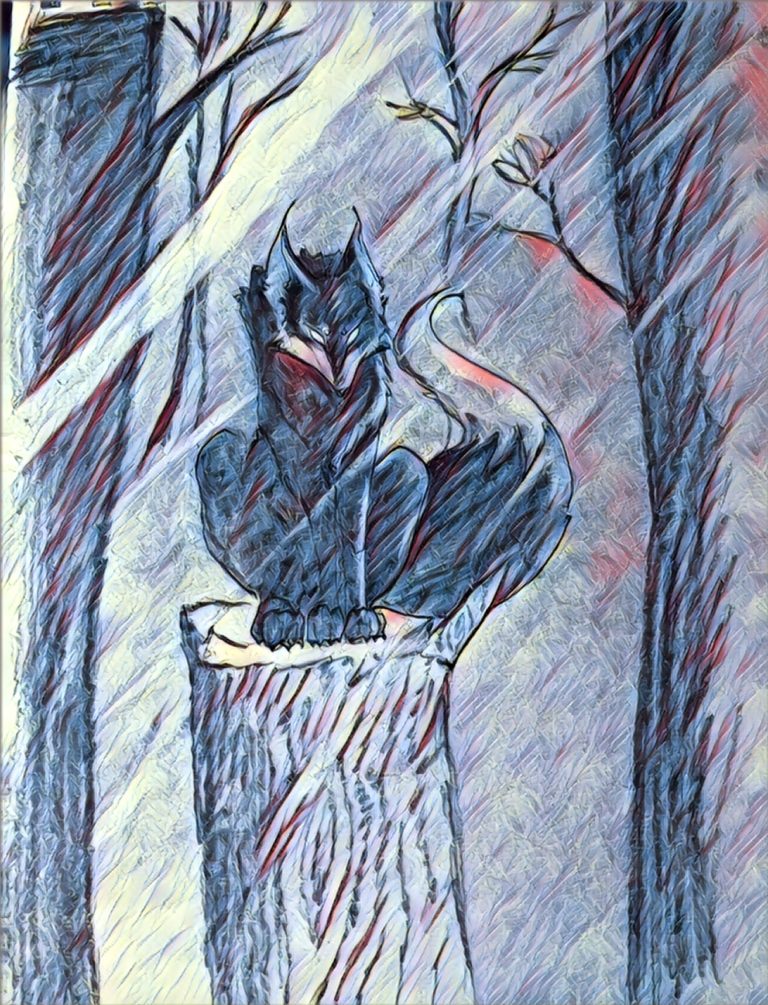