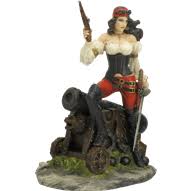 “Why do we live here now papa?”, asked the child, scribbling absentmindedly in the dirt using a stick.
“So, I can work and so we can eat”, replied the man as he dumped a bowl of chopped meat and vegetables into an iron pot that hung from a chain above the hearth.
“There was no work on the island, papa?”
“Not for me, paisano.”, the man muttered as he tossed some dried herbs into the pot for flavor. “There’s nothing good in those islands for us now.”
“The islands have bad-guys, papa?”
The man pushed the pot to a different position over the fire so its contents would boil more gently. “Of course! You know about Le Sorelle Pirati, no?”
“No papa, tell me about The Pirate Sisters!”
“The Sisters Pirates.”
“Cosa?”
The man laughed. “The Sisters are the name of all the islands. The islands, they have pirates, si.”
“The pirates are not sisters?”
“They are all kinds, but yes they have a lot of girl pirates, girl captains, and a girl ammiraglia. I think they have a lot of girl pirates for the same reason you were confused by the name. It is an amusing coincidenza, no?”
“Co-in. Coinzi”, the boy struggled with the word while using the stick as a cutlass and dueling the empty wall while his father smiled.
“Can I be a pirate, papa?”, the boy asked innocently while the man checked on the pot. His smile half faded, and he lied in the easy way that only a parent can, “Of course you can, Sergio.”

———————————————–
Organization: THE SISTERS PIRATES
Type: Outlaw
Ties: Many formal and informal throughout Hestralia (and likely beyond).
Tier: 4 (estimated)

History:
There are those (especially that live in the islands in question) that believe the recovery of humankind started from the aftermath of the Age of Witchkings in the islands called The Sisters. These are remote enough to not be easily reached by unskilled navigators, and small enough that they could be reclaimed one by one. This allowed the fledgling new civilization of human refugees from the ancient disaster to raid and conquer their way into the continent and establish the nations we know now. Interestingly, the same remoteness and beliefs about the history of The Sisters is assumed to be why they were the last to join the Unified Hestralia, and even to this day often ignore the rule of Aquila. It is also known that the reason the Sisters Pirates are often held in a degree of reverence is the belief that they are continuing the lifestyle of the original warriors and raiders that launched the recovery of humankind so long ago. (This savage time before the Age of Heroes is poorly understood, and nearly undocumented.)

The Sisters Pirates have been involved in almost every major conflict accessible by sea in the eastern part of the world. They have been known to appear and turn the tide of a battle, but also to betray a side they were hired to fight for. The motivations of these pirates would seem to be strictly profit motivated, but there is some evidence they work, in a roundabout way, to maintain the freedom of Le Sorelle.

The Sisters Pirates are organized loosely after the model of a naval fleet. There is an admiral that rules over the whole organization, four commodores with logistical and political duties but no fleets of their own, and a lot of captains that command everything from whole battlegroups to individual ships.