The Sepharahim count as a Villain Concept, and it requires additional Glory to enter play as an Inquisitor.

The Inquisition, or the Sepharihim, are the Church’s last line of defense against heresy.  Their solemn task is to route out heresy, wherever it can be found, and destroy it – its proponents, those it corrupted, its records, its writings, its remnants, and to bury the ashes away from the light forever.  Heretical faiths, especially the Triumvirate of Thorns – anathema – pose such a threat to the sanctity of the Church and humankind that Inquisitors are given incredible disruptive power and legal authority to undertake their mission.

The Inquisition is rightly feared the world over, even among the faithful and the mighty.  While they are agents of the Church, all nobles of the Throne swear in their oaths to uphold the religion of Benalus and the Church of Mankind as the only religious doctrine permissible in their realms.  The Inquisition, as ultimate arbiters of the faith, thus have power to mandate action – or at least forbearance as they do their work – from even nobles in their own land when it comes to the prosecution of their quarry.   Any who would get in their way certainly invite the question as to why someone would protect a heretic if they did not also have heretical sympathies.

While it is commonly believed that the role of the Inquisition is simply to hunt down heretics, their role is more subtly understood to be the Church’s censorship bureau, ensuring that dangerous ideas, whatever their form, do not enter general circulation.  The Church’s holy mission requires thousands of years of progress toward an eventual perfect world, and the danger of a single idea poisoning that path and taking it off course is enormous.  It is just as much their task to destroy the heretic as it is to ensure that seditious ideas do not take root, and for the same reason.  The Inquisition does that hardest of tasks – what can be and what cannot, what is permissible and what is not, and how many must die to ensure that a single heretic and their poison ideas dies with them.

Eternal Heresy is the one sin for which their can be no atonement – no atonement save one.  The sacred fire of the lord burns away the sins of those it touches, and as it consumes the heart, the soul is made clean through forced absolution.  Those the Inquisitor puts to sacred flame can be purified and cleansed enough to see Heaven, regardless of their sins in life.  It is for this reason that those innocents who must burn next to a witch for lack of definitive proof of the witch’s identity can do so with a light heart.

The Hexenhammer was penned by Saint Vederick Sariel, the founder of the Inquisition.  Unlike all of the other Gospels, it is not included in the Testimonium because it is thought to be too sensitive to have in open distribution.  Instead, Inquisitors are carefully and selectively invited to view it and carry their own copy, which itself is in code.  In fact, it is said that even the code is itself a code, and that the Hexenhammer can be deciphered many different ways using more and more complex cryptography.  As Inquisitors are inducted into the deeper secrets of the Sepharahim Order, they are granted more and more access to the secret knowledge held within its sacred pages.

Covenant of Authority
A member of the Sepharahim Must never acknowledge the authority of any being save God, the Emperor, The Pontifex, or a more senior member of the Inquisition.

Sacred Rituals of the Hexenhammer

Grant those who serve you a measure of power, naming them your Prosecutor.

Ritual: The Inquisitor brings one who would pledge their life in service to the Inquisition before them. The individual kneels and swears to the Covenant of the Sepharihim Order six times, recognizing the Inquisitor as their authority. They must receive a branding of the Seal of Sepharian, during which they must swear the oath for the seventh time. 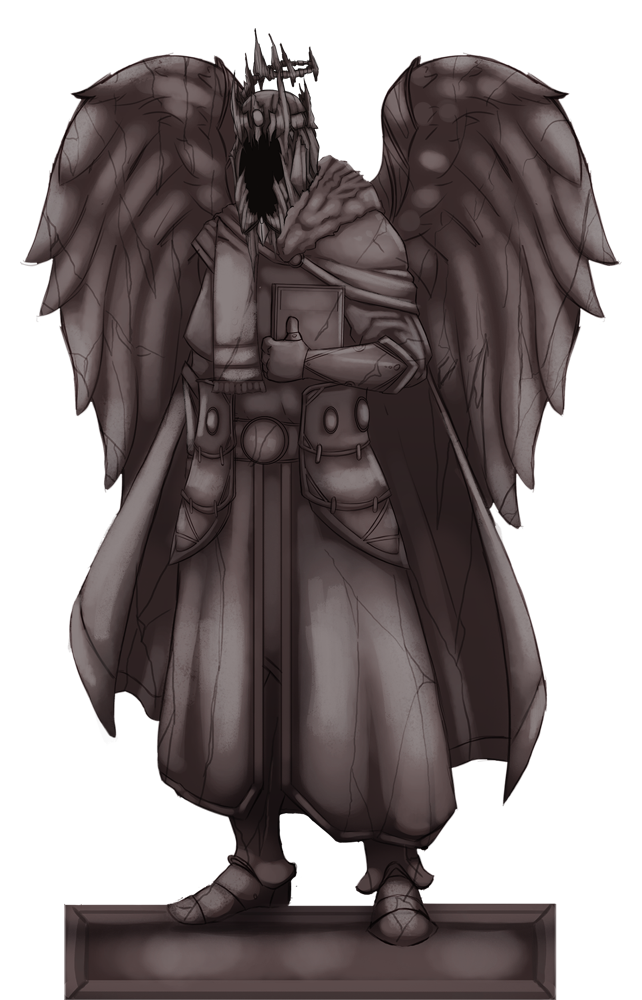 All Inquisitors have gone through this process as a prerequisite of joining the Sepharihim.

Grant the right to sin.

Ritual:  The Inquisitor writes upon a parchment the exact nature of the sin to be committed, at what date, how it will be done, by whom (which must be either a member of the Inquisition, an Inquisitorial Prosecutor, or a member of the Highborn nobility) and the reason that the act of sin is in the interest of God and the Throne.  The Writ may include multiple sins but only one day’s worth of activities and pertaining to one subject matter, though many Writs can be issued.  The parchment is signed and sealed with the Seal of Sepharian in red wax.

Mechanics:  So long as the events involving the sin line up with the description in the Writ, the act is not a sin.  It causes no Depravity and does not need further atonement.  This ritual can include the breaking of a Covenant or an incident of use of Corrupted Paladin powers.

By breaking the symbol of a false faith, the Inquisitor gains authority and power over the rituals of that faith

Ritual: The Inquisitor must either place an Icon of Sepharian or inscribe the Seal of Sepharian in a prominent place above a symbol of another religion, declare Sepharian’s Authority above the faith that is represented below, and then unquestionably destroy the symbol.

This may be a symbol of religious authority, an item used in a ritual or blessed by an opposing god, or even a priest of that religion in extreme circumstances. The method of destruction may vary based on the Inquisitor and the symbol, but often they are broken with a hammer and the remaining pieces burned in a Sacred Flame.

Prop: Image or Seal of Sepharian

Effect: The Inquisitor may now purchase rituals of the subjugated religion and gain the ability to cancel any ritual that they themselves know by invoking on Sepharian’s power and calling “Unweave (Ritual Name)”

The Inquisitor may learn rituals from holy texts of other religions or by using the Research Action along with sufficient notes detailing the ritual they wish to learn.

A well concealed secret within the Inquisition is that Inquisitors are fully capable of performing the rituals they learn as if they were themselves priests of the faiths that they have subjugated. Actually doing so is considered Heresy, though on the past some of these rituals have touched on universal principles, and the Inquisition has been able to convert them to a holy form through Invention.

The Inquisitor claims Dominion in the face of all other gods.

Ritual: The Inquisitor must stand prominently and hold aloft a golden leonem for the enemies of Mankind to see, loudly declaring Their Dominion over all things.

Effects: The Inquisitor creates Dominion for the Church of Mankind even if an opposing faith also has Dominion in a place, allowing Benalian Priests to perform rituals in the scene. This lasts for as long as the Inquisitor remains undefeated.

Remove or enforce the obligation of an oath upon an individual.

Ritual: The Inquisitor calls upon Sepharian to avow or abjure an oath bound to an individual’s soul. After placing the subject’s hand upon the Testimonium or the Hexenhammer the Inquisitor commands them to either avow or abjure a specific oath, speaking the intended oath aloud to the individual in Aldersabin and making them repeat it back to them. The individual does not need to be willing and may be coerced, but must speak the words in order to be bound or released from their oath.

Avow: The target is bound to do or not do a specific thing, and gains the oath as a Belief. If they break said oath they are guilty of Mortal Sloth and until they atone for this sin, they are Miserable. This is often used to swear a subject to be truthful during a trial.

Abjure: The target becomes unbound of an oath they have sworn or have had placed upon them. They can now act against it without gaining Mortal Sloth, and lose that Belief if they had it. This may even be used to sever supernatural oaths or covenants, but not without consequence.

Bless a vial of refined spirits to be used to reinforce your allies or destroy your foes.

Ritual: The Inquisitor takes a bottle of Spirits and prays over it, chanting the holy invocation of Sepharian 7 times. They must then mark the flask with the Seal of Sepharian and seal it with a cork and wax.

Mechanic: Three uses of Spirits of Benediction are created with each use of this ritual. Spirits blessed in this manner may serve two different purposes.

Anoint: Any Highborn, Inquisitor, or Prosecutor may be anointed with spirits; the Seal of Sepharian drawn on their forehead with the Spirit of Benediction which is then set alight. They gain Great Resolve for so long as they maintain strict decorum, following the rules of Posture, keeping good physical posture, (eyes up, shoulders back, no leaning or stooping) as well as never ending a sentence with a question mark.

Ignis: If the Inquisitor knows the power of Cleansing Flame, then the Spirits of Benediction may be used to anoint a blade or other weapon used by a Highborn, an Inquisitor, or a Prosecutor, and be set alight.  The flame will burn for one scene or Trial, and will not damage the weapon it burns on. Hits with this weapon gain Power as they burn their foes. This flame is considered to be a Cleansing Flame, causing those slain by it to have their heresy burned away and preventing their return via blasphemous rites.

Protect oneself from Rituals and Spells.

Ritual: The Inquisitor takes the blood of someone with a pure soul and mixes it with the ashes of the heart of an Anathema who died by an Inquisitor’s blessed flame.  The entire mixture is placed in a crucible with a weight of pure gold.  Once fused, the gold then is reforged into a heavy piece of Jewelry in the shape of the Seal of Sepharian and blessed by the Inquisitor, calling upon the Archangel to protect him against corruption and defend him in the name of Almighty God.

Props: Gold colored amulet with the Seal of Sepharian.

Mechanic: The Inquisitor or a Sacrist they are overseeing must spend 3 Blacksmithing Effort during a Crafting action to create the Rosarius. This protects the Inquisitor against magical spells and curses while they are wearing it, allowing the bearer of the Rosarius to Exert to defend against such forces, gaining either 1 Discipline or 1 Block to defend against any call with the Flame, Lightning, Stone, Water, or Spiritual Quality, or to cause Ritual Curses that do not normally allow a defense to fail, as if the bearer were Pragmatic instead of Spiritual. Spells which have a visible effect are seen to simply die out as they reach the Inquisitor.

Cut off an individual from the Grace of God.

Props: A Writ of Excommunication

Mechanic: The excommunicated individual is severed from all rituals.  No rituals from The Liturgy of Holy Lethia or the Triumvirate of Thorns can be successfully performed upon them ever again.